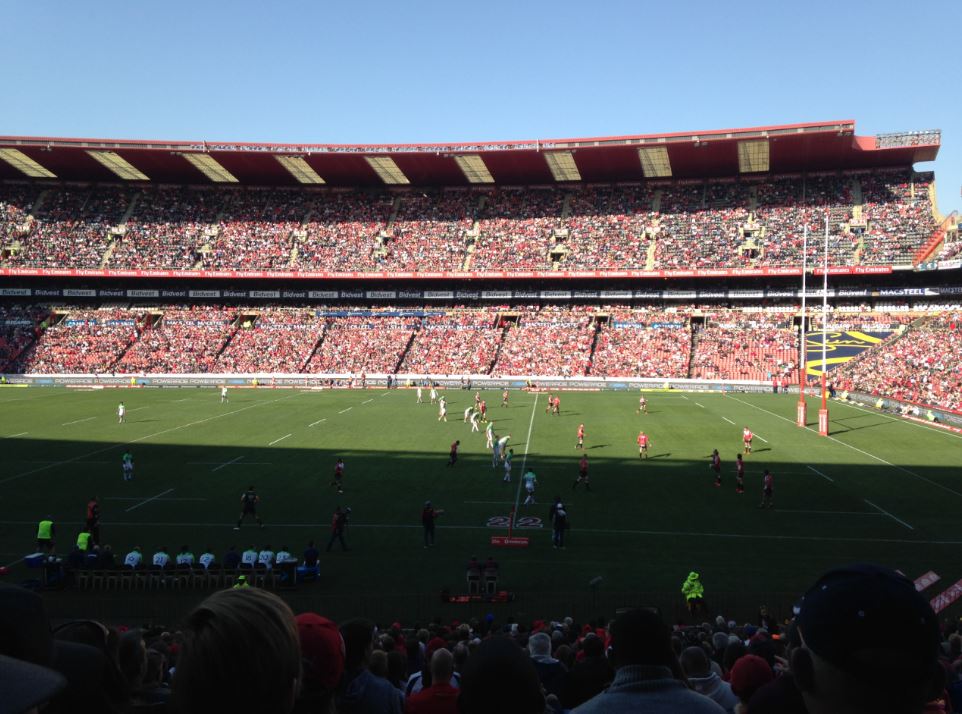 Ellis Park, the national rugby stadium of South Africa, is also now known as the Emirates Stadium and is covered in the airline’s branding. It’s also the home stadium of the Lions, the South African rugby champions. Claire and I had managed to get ourselves two tickets to watch the Lions take on a New Zealand team called the Highlanders in the semi final of an intercontinental tournament. The winner of this would take on another Kiwi team, the Crusaders, in the final the following week, so a lot was at stake.

On the walk to the ground, from Curiocity Backpackers where we were staying, we walked past plenty of South Africans having a braai in the street. A braai is essentially a barbecue and apparently whenever the rugby is on the fans bring their braais along with them and pitch up in the street outside the ground for a few hours enjoying some meat and beer. It meant the atmosphere in the area around the ground was pretty lively. We got our tickets scanned and entered the stadium, before spending around half an hour trying to find out seats. But after a little struggle we located our spot and settled in for the game. It turns out that for 150 Rand each, which is around £7.50, you can get a pretty good ticket – we were sat on the first tier, around forty yards up from the edge of the pitch. We were pretty happy with our spot and enjoyed a beer before the game in our seats bathed in the mid afternoon sunshine.

The atmosphere during the game was pretty lively, though not as loud as it would have been a few miles away in the Soccer City Stadium. At the same time as the rugby was kicking off, a local derby of epic proportions in the ‘soccer’ was taking place. The Kaiser Chiefs, from Soweto, were taking on their local rivals the Orlando Pirates, in the biggest domestic game in African football. Apparently the 95,000 seater stadium (almost twice the size of Ellis Park where we were) had sold out in a matter of moments for the clash. I could only imagine how electrifying the atmosphere would have been at that game. However, I wasn’t to be deterred, we had managed to get tickets to a very competitive game of rugby between two fantastic teams. Besides, Claire was definitely happy that the football had sold out.

The game itself was a cracker. The Lions were dominant in their display, beating the Highlanders comfortably 42 – 28. The ground was pretty much full and there was no sign of any Kiwi fans cheering on the defeated Highlanders, though I am sure there must have been a couple in the crowd somewhere. The Lions, however, were loudly cheered on by the home support who really started to enjoy themselves towards the end of the game. There was one phenomenon that then began to appear that I had not seen before.

Now, I love rugby. However, I must admit that I rarely go and watch games live, preferring to follow the big international games when they’re on television. I guess you could call me an armchair supporter. Therefore I am not sure if what we witnessed is a common occurrence at all rugby stadiums or if it was specific to Lions games. However, during the second half of the match the game was interrupted, during lulls in play, by some giant form of collective karaoke – or ‘rugbyoke’ if you will. When the ball was out of play, as the referee made a decision using the video replay, the big screen cut to clips of songs with the accompanying lyrics on the screen. There is something very surreal about sitting in a stadium full of people all passionately singing ‘Sweet Caroline’ as loud as they could in their South African accents. The choice of songs seemed incredibly random, but did add an extra element of entertainment to the match. We were baffled.

The crowd was almost entirely white, which was another surreal feeling for Claire and I. We’d been in Africa for a long time by this point and hadn’t seen so many white people in a long time. I couldn’t help but feel, whilst glancing around, that all white people look the same. It’s a feeling I couldn’t really explain if you asked me to, other than saying that when suddenly surrounded by white people again, it felt like everyone looked incredibly similar. We were also astonished by the number of fat people – there were lots – and by just how many people were speaking Afrikaans. Almost everyone we heard talking throughout the stadium were speaking the language.

Now I know the Boer War was a long time ago, and that a lot of the white South Africans aren’t descendants from the Boers at all. But when surrounded by Afrikaans speaking people, who are most probably descendants from Boers, it’s hard to not think about the past. A few people I have spoken to have said that there are still a lot of Afrikaans speaking people who are resentful about what happened in the past. Obviously not everyone is still seething about what happened, but there is still a lot of racism in the Afrikaans speaking parts of South Africa, and it is these people who are most likely to still harbour some ill feeling towards Brits. And, whilst disliking modern day Brits for the actions of their nation over 100 years ago is ridiculous, I can’t blame them for still feeling some level of sadness for what happened long ago. Not necessarily for the way the Brits took ‘the Boers’ land’ from them. It was the Africans’ land before it was the Boers’ after all. But more for the way in which the Brits took that land and the awful treatment of the Boer survivors. Not many people are aware of the concentration camps that the Brits set up in the early 1900s, to house Boer war prisoners as well as the innocent wives and children of the Boers that were fighting in that war and, bafflingly, even the wives and children of the Boer men who were fighting for the British. It is estimated that at one point there were 111,000 white people and 43,000 ‘coloured’ – mixed race people – in these camps. In just one month it was reported that 3,156 white people and 698 ‘coloured’ people had died in captivity.

In Britain we’re rarely taught about the awful things that have happened in the name of British imperialism. From speaking to people on this trip I know that in Belgium many people are unaware of the awful things that happened in the Congo under their rule. It seems to be the norm for national curriculums to avoid teaching children about their country’s failings. In Germany children are obviously taught about the Second World War, as that was very recent, however, I do wonder if the Germans of today know about the genocide in Namibia that was orchestrated by their government. Or if they know about the hundreds of thousands of native Africans who were killed in German East Africa – now Tanzania – due to the famine that was created by the Germans as a means of putting down a rebellion. Every country that stepped into Africa during colonial times has a lot of blood on their hands and it’s very important not to forget this. I think that it is vitally important to get a good idea of everything that your nation has done, good and bad. I feel that if we’re aware of how cruel our ancestors have been, then we can work towards ensuring that it never happens again. Luckily for us, none of the Afrikaans speaking people we met along the way seemed to have any negative feeling towards us as Brits. Though a couple have referenced the Boer war in passing, but more in a jovial manner.

But anyway, our day out at the rugby was fantastic, and after the game we strolled back to the area of Maboneng where we were staying and had a curry at a small spot called Thali. The food at this little curry house was amazing and we actually visited it twice during our short stay in Johannesburg. The day after the rugby spelled the end of our time in the city. We were off to the airport in the morning to collect our rental car that we’d be using to drive around South Africa for the next big chink of our trip. 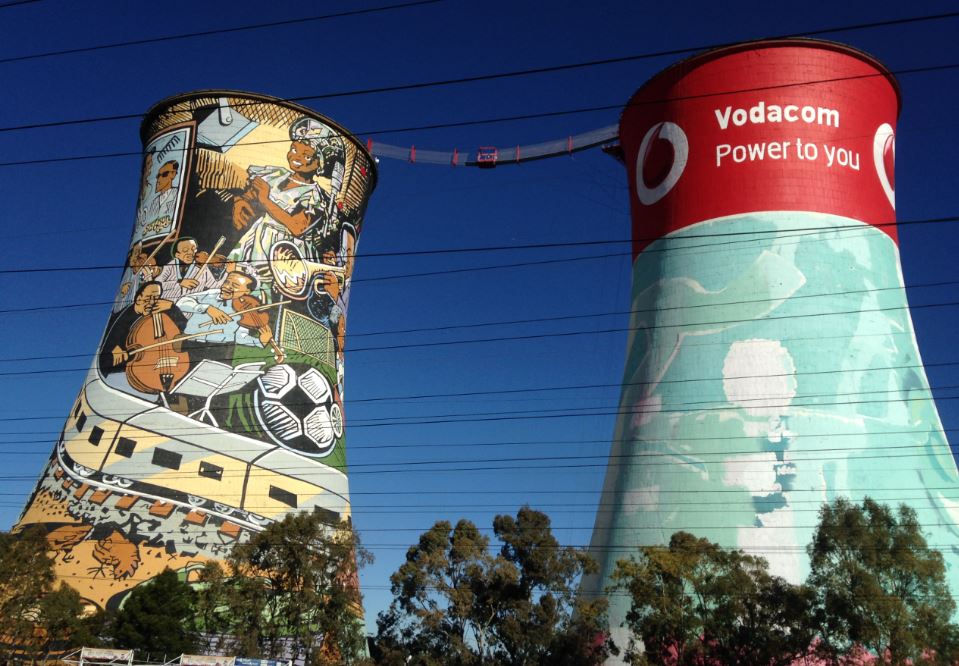 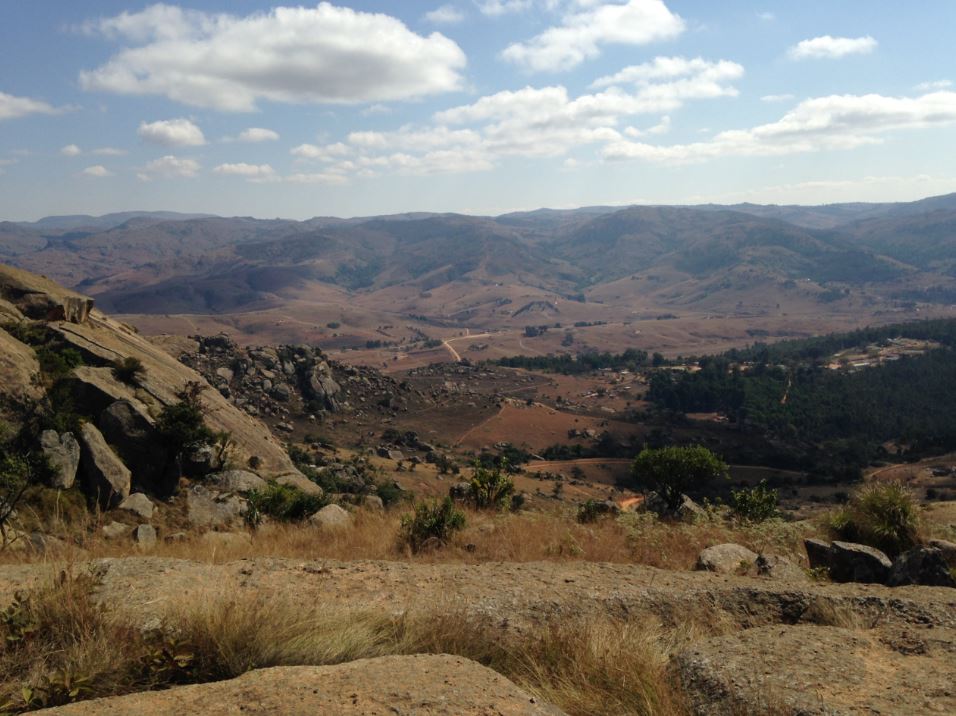 Swaziland - A small but beautiful country