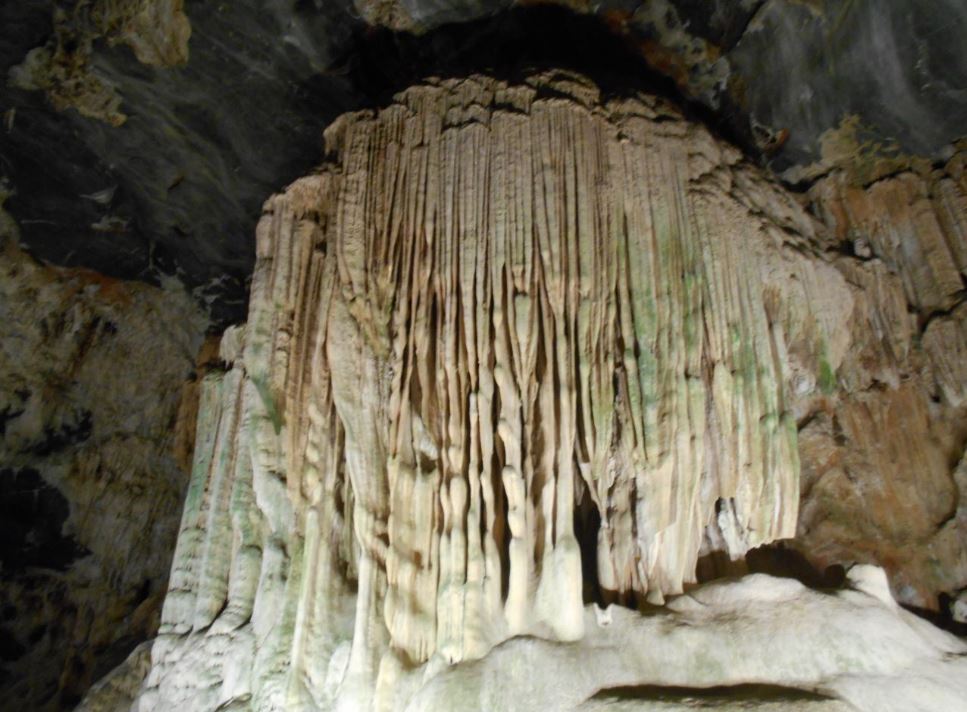 The Cango Caves on the outskirts of the town of Outdshoorn are situated inside a gigantic limestone ridge and are millions of years old. There are huge staligtites and staligmites that tower metres up from the ground and down from the ceiling, with one being estimated to be one and a half million years old. The caves are incredible, with the main atrium about the size of a football pitch and the smallest pathways so small you have to crawl through on your belly.

Claire and I had made our way to Outdshoorn from Wilderness and once we’d arrived at the lodge we booked ourselves into the Adventure Tour at the caves. The town was surrounded by Ostrich farms, so on our way there we passed huge numbers of these massive birds hanging out in fields. We also passed some gorgeous mountain ranges and other scenery that was so beautiful we had to stop at the side of the road to soak it in.

But back to the caves. We began by walking, with the rest of the group, through the giant first ‘room’. This was massive and used to hold music concerts where it would fit a few hundred people. However, they had to stop this because people were breaking off parts of the cave and taking them home. The ceiling was high, the room was massive, and in it were some amazing rock and mineral formations. We then passed through a few more larger rooms before heading to the first smaller part, known as ‘The Tunnel of Love’. Here, we had to walk sideways, making ourselves as narrow as possible in order to fit through. We slowly edged along, shuffling our feet. The pathway was metres long and very narrow in places. The ground was also uneven, meaning you had to be really careful about where you placed your feet and you had to duck often to avoid bumping your head. When it finally opened out and you were able to step into a nice large section once again, it was a relief. You could stand up straight and stretch your back out.

There were a few people in our group who were rather large. Not really fat, but bulky. At the beginning before we set off our tour guide mentioned some of the small parts of the cave we’d be squeezing through, the two larger people, a man and a woman, both looked rather concerned. After making it out of the thin tunnel we waited for about five minutes as the larger people squashed and squeezed their way through, which did take them rather long. And this was only the beginning. The deeper into the caves we were heading, the narrower and more tricky it was going to get.

After their struggle early on I am very surprised that they made it through the rest of the tunnels. We passed through a long section on our haunches  and the next part required us to crawl through a gap that was twisting and turning upwards, meaning you had to carefully plant your feet in specific spaces in order to push your body up. Claire and I were the first two to go and made it through. It was however, incredibly tight. The method to make it up was so very specific. You had to duck low down to make it through the first gap and then there was literally one spot to put your foot in order to push yourself upwards. Then you had to cling to the sides and heave your body over a large smooth rock, before dropping down into the open space on the other side. If you didn’t manage to follow the instructions to the letter, then you would no doubt end up wedged in. This was most certainly the trickiest piece of the entire labyrinth and I was extremely relieved that we both made it to the other side.

We’d made it into the penultimate room and had one final piece of the cave to navigate. Our final leg was the tiny ‘Postbox’. This piece of the cave required us to crawl on our bellies through a small gap before sliding down a few metres through an opening that was only 27cm tall at one point. Claire went first and I followed, both of us sliding through the gap ending up in a heap on the floor below. Luckily, the minerals have been eroded so much over time that they’re smooth and shiny, so sliding on your belly is actually much easier than you’d imagine.

Once we’d made it to the end we had to play the waiting game. Claire and I, along with a few others, waited in anticipation to see if the rest of the group had made it through. We’d walked to the meeting point about fifty metres from the Postbox, so weren’t able to wait and see if the larger members of our group could squish themselves through the gap. About twenty minutes later they caught up with us, however, we were unable to bring ourselves to ask them if they’d tried to make it through the gap or if they’d gone back around. I guess we’ll never know.

Whilst we were waiting we’d had visions of one of them getting stuck. We pictured an alarm going off inside the cave and red lights flashing. A small chain of men would come running by, their footsteps in perfect time with one another, carrying buckets of grease on their shoulders. They’d arrive to where the man was wedged and pull off the his shirt greasing up his rubbery upper half in order for him to have enough lubrication to slip through the gap and onto the floor. He’d essentially require a basting to get through. We were, of course, whispering all of this to one another, but couldn’t smother our chuckles enough to hide them completely. Claire’s laugh in particular was echoing throughout the cave. We pictured the man, having to walk back through the cave in his underpants, covered in grease, his clothes in a little white plastic back swinging by his side. The indignity. I asked our guide, quietly and at the end of the tour, if anyone had ever got stuck. She informed me that no one had.

After the cave visit we spent the evening back at the lodge where we ate an omelette made out of an ostrich egg. Claire had picked one up from a local farm so together we set about cooking it. Now, an ostrich egg is huge. It’s almost the same size as Claire’s head. She was informed that it is the equivalent of around 24 chicken eggs, so rather than cook the whole thing, we used about a third. However, despite us using a fraction of the egg, it still ended up being the largest omelette I’ve ever seen. We cut it in half and tucked in. In terms of its taste, the ostrich egg was pretty similar to regular chicken eggs. We used up another third of the egg in the morning for breakfast and eventually left leaving the rest for the lodge’s handyman to eat for his lunch. He seemed pretty pleased.

After leaving Outdshoorn we set off on our way. Next stop: Cape Town! 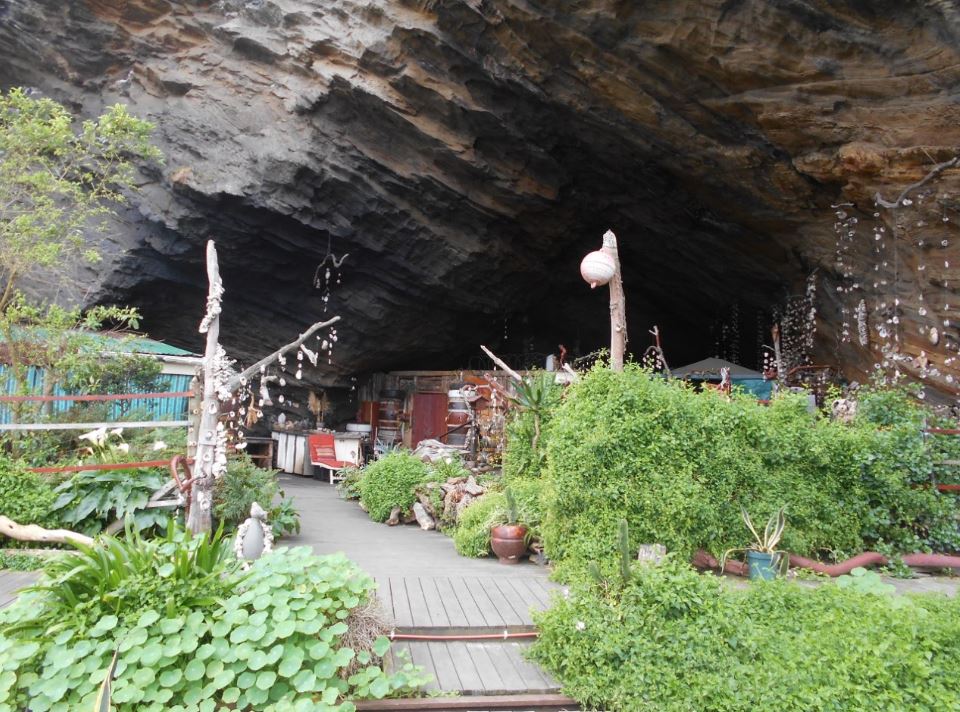 Wilderness - The Man Who Lives in a Cave 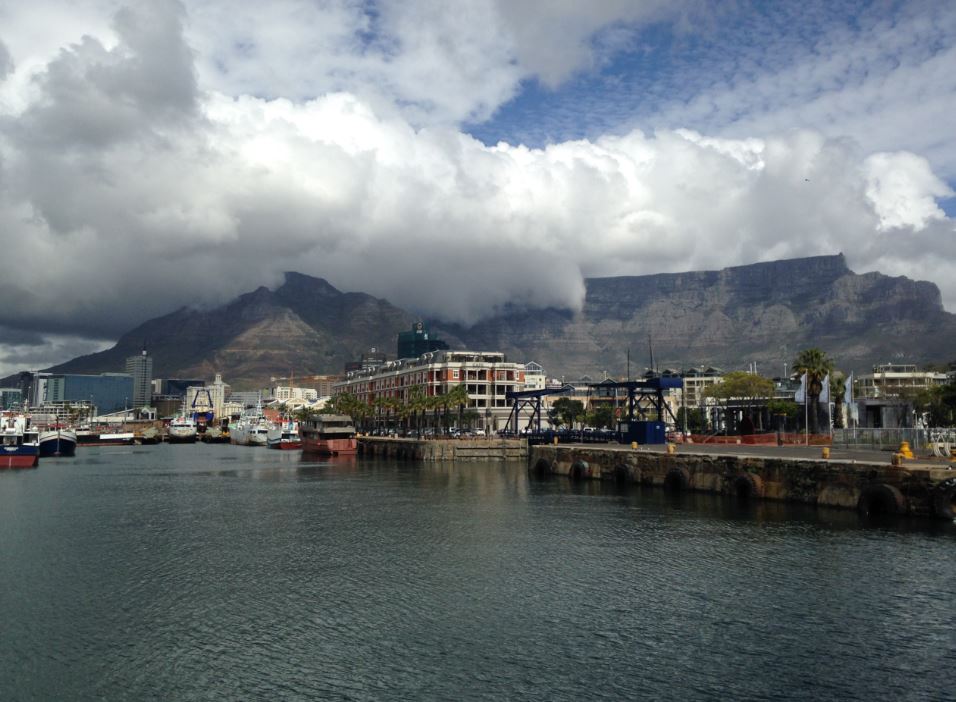